WELCOME TO OUR WHITE PAPER 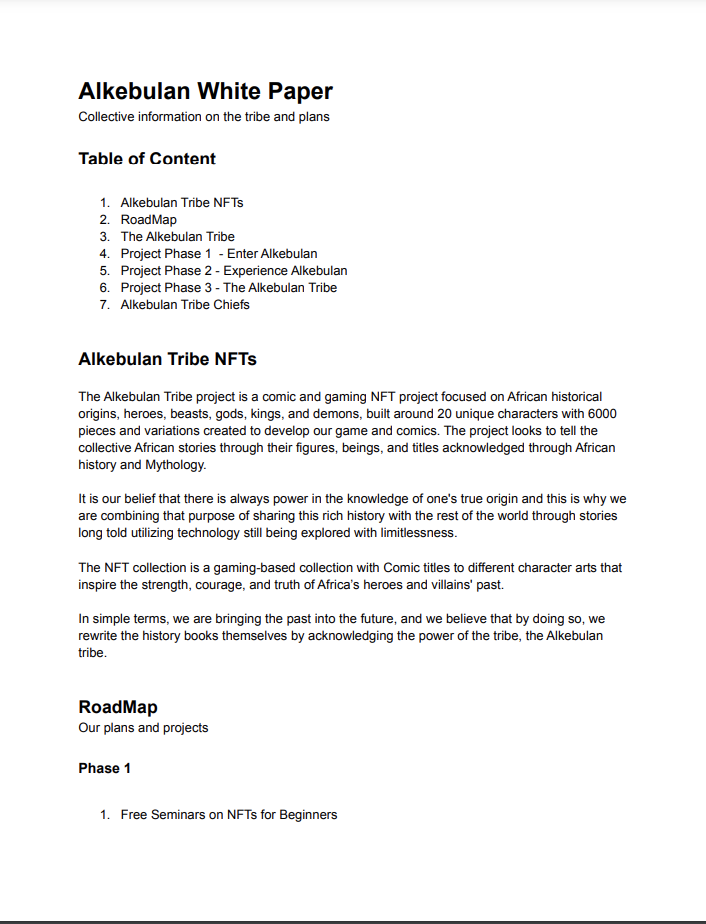 The Alkebulan Tribe NFTs is an African historically driven, character-focused gaming collection that looks to tell the collective African stories through their figures, beings, and titles acknowledged through African history and Mythology.

It is our belief that there is always power in the knowledge of one's true origin and this is why we are combining that purpose of sharing this rich history with the rest of the world through stories long told utilizing technology still being explored with limitlessness.

The NFT collection is a gaming-based collection with Comic titles to different character arts that inspire the strength, courage, and truth of Africa’s heroes and villains' past.

In simple terms, we are bringing the past into the future, and we believe that by doing so, we rewrite the history books themselves by acknowledging the power of the tribe, the Alkebulan tribe.

Our plans and projects

The story is Alkebulan: Chronicles of Nkari.

The Alkebulan tribe is a collective born of the hearts and minds of some of the brightest out of Africa. The goal is to tell and preserve Africa's culture, story, tradition, and folklore to a new generation, in a way that will never be forgotten.

The tribe is made up of people who believe in telling these stories, and the rich histories, and share a passion for technology-driven products that can be leveraged to improve lives and systems that support the development of people and economies.

We strongly believe in education, not in the common term, but in the actuality of the word, knowing that where there is true knowledge, there’s always light and prosperity. This was our first goal, to build a group of knowledgeable individuals who are passionate about understanding the future of technology, exchange, and value. We knew that once we can focus on giving out this information, we can make a community of like-minded individuals that share similar passions, for this information, the histories, and our stories are yet untold. We are aware that building a community is the most important phase and can determine the success or failure of any project from the get-go. For any project to succeed, it needs a strong and supportive community that shares the same vision of the project. So, we set out to educate and find those who share our minds and vision

Free Seminars on NFTs to Beginners

We hosted several NFTs training sessions for FREE across multiple platforms on social media, helping beginners who were passionate about NFTs and web 3.0 already but couldn’t get a clear understanding of what the collective buzz was about to learn the details and simplicity behind the future technology. We had intended to host pocket classes and sessions but ended up with a massive response and interest from people from all over the globe who took interest in learning about NFTs, building our community founders as thought leaders in the space, and growing a community of followers who were passionate first about learning what was to be explored through NFTs.

As we grew a following of passionate individuals who wanted to understand NFTs, the massive break for our product came when we finally revealed our product's kick-off 3D animated video. The video grew in attendance and raised our discord community organically to 2000 members within our first two weeks of sharing our video.

The introduction to characters was unexpected and even built excitement amongst those who had joined to learn and gather those who were excited about our story. As of March 2022, We are over 12000 strong members within our Discord alone

As the community grew and continues to grow, we recruited moderators who manage the community and keep the energy growing with trivia, games, and giveaways.

During this stage, we put a giveaway for the Oculus Quest 2 to show our commitment to the community and build an understanding of the opportunities within the metaverse.

This is the pre-series release to elaborate on the back story, we would be releasing an amazing and rich character-focused comic to our community members to kick start the story and adventure that await them in our future gaming universe.

We are a group made up of intelligent technology experts and we value the security that comes with NFT products, as such, we would be working on building a strong and future-minded contract using Ethereum ERC721A

We would be allowing the minting of our initial 6000 unique pieces with 20 unique special Characters to guide our games and Comic stories. The mint would happen on our website https://alkebulantribe.io

The reveal would showcase all our 6000 unique pieces and their special character traits. These pieces would then be made available for a secondary listing.

Our first initiative after sales would be to support and give back through charity projects by sponsoring the campaign to restore Africa History (Pre-Colonisation, Colonization Era & Post Colonization Era) as educational resources for Students. We would also be sponsoring graduate trainees to push a movement on educating the younger generation of Africans to learn about the rich history of pre-colonization to improve the confidence and courage of Africans to fearlessly pursue their dreams, goals, and beliefs without the fears or limitations.

Free Release of Alkebulan Comics Monthly for the first three (3) issues and the 5th issue as a Free Comic Book NFT for Alkebulan Holders (Every 10th Edition would be AirDrop as Free NFTs to 3+ Pieces Alkebulan holders).

In pursuit of our goal, we would release an interactive motion comic with a special edition of our comic collection within the blockchain exclusively available to holders of our NFTs.

Creation of Smart Contract for the Alkebulan Tokens (Alkebulan Manillas)

As a serious contender for the metaverse, we would be setting out to set up our own tokens named after the original name assigned to the mode of transactions historically in ancient times known as Manillas. Alkebulan manillas will be the first utility to be introduced as the currency in the Alkebulan Tribe Metaverse. It can be used to transact within the Metaverse to interact with the contracts for future features

Establish a launch process for the Alkebulan Manillas

This would be the highlight for Phase 2 as we are already developing our gaming construct for mobile users on Android and iOS platforms. We would be releasing this game with incredible characters, animation, style, and story background to allow our community enjoys activities they can have fun with while interacting with other community members within the game. The game would also allow owners of pieces a lifetime profit from character skin rights purchases.

Value offer of lifetime revenue from character skin purchases to the holders of the Alkebulan piece, whose skin is purchased

Oculus Version of our Game

Our next gaming presence would be on the web 3.0 technology itself for Oculus Horizon Metaverse to create an experience for our users to interact at a very high level with community members and the pieces

Web 3.0 Version of our Game

Beyond the Oculus version, we would also release general web 3.0 versions of the game for other users within the metaverse

Access to own land, assets, etc within our web 3.0 game using the Alkebulan Manillas

This would allow our community members to purchase assets that they can profit from within our games, with special collectibles that can be traded across the space

Meet-Up within our Existing Metaverse

To prove how ahead of the times we are, we have secured a metaverse property that would allow our community members and holders of our pieces to interact, trade, build relationships within our space

The Alkebulan Chiefs are a group of technology, products, and comic professionals across the world and have come together to build an NFT product that can revolutionize all the spaces that they are passionate about. Their collective value for community lead products has been the fundamental drive for this project

Justice Eneje has been in the technology industry for years, starting out as the Vice President of Google Ambassadors way back in College and went straight to Entrepreneurship starting out E and E online stores which stand for everything and everyone online stores where he focused on providing technology machines to students and friends and from there, expanded into a mainstream business. He then went on to join Scott C. Eneje for their first majorly funded business together starting Yandi Nigeria and running it successfully as a digital solutions company with a fully native eCommerce multi-vendor system that further expanded into building chatbots, and plugins for other technology.  The group further expanded and Justice Eneje went on to start Perviewpays which was an online advertising platform that paid users who watched and interacted with business ads they came across while watching or creating video content.

In the wake of this business, Justice co-founded WeweTube limited with his partner Emmanuel Adoga where they launched a Cryptocurrency focused advertising platform that paid users for the ads they saw, the games they played, and the activities they are involved in within the platform. This product has grown with a high user base and has helped build multiple great products for start-up businesses.

Tobe Max Ezeogu is an excellent creative with years of excellence in the African Comic and gaming space. As a founder of Juju-Games and one of the founding members of Comic Republic where they released globally recognized stories and even sealed a deal with Hollywood to release one of their title comics. He has amazing titles to his name alongside his brother Ozo Ezeogu who is the lead creative for our Comic collection. With the power of these two brothers who combined have some of the greatest successes in west African comics to be recognized globally with highlights of their works on BBC and other international platforms.

Michael Eneje is a successful 3D animator and storyteller, with huge success in character development for the Internationally released Dawn of Thunder with Komotion Studios, he has gone on to release amazing art characters, including all the 3D versions of all our pieces and arts. The brilliant mind behind stories co-written with Scott C. Eneje such as Morningstar, the play. Michael has an incredible mind for storytelling.

His experience and success with telling and animating African stories with Komotion Studios, has made him a very well sort after animator in the Nigerian and International Music industry as he has created a lot of amazing animated music videos.

Scott C. Eneje is a world-class technology expert and internationally successful Product Manager, a published author with his books on Amazon, focused on building start-up businesses in Africa, as well as a Novel based on the Mystical.

He started his career over a decade ago as a Product Manager building freelance products and mapping out resources with Engineers across continents and went on to co-found Yandi Nigeria with his brother, Justice Eneje, and his long-time engineer, Edikan Umoh. The Company was focused on offering digital solutions and eCommerce services to local business owners.

After his time at Yandi, Scott went on to write a book on running a business titled “How To Fail”. He also published a mystical fictional Novel, titled “Griffins’ Curse”.

In the last few years, he has served as the Product Manager with the New-York, based Centricity Inc, where he and his engineers developed insight-driven data collection tools that simplified data tracking and market placement which supported major corporations like Kraft Heinz and were featured on NBC and Good Morning America.

He is also one of the founding members of the Alkebulan Tribe NFT gaming and comic projects.

Scott is focused on ensuring that every product he partners in building, would truly improve lives.